Umzumbe, which is near Port Shepstone, gives its name to one of the 4 local municipalities of the KZN South Coast, as well as its Blue Flag beach. Said to have been started by a band of cannibals and renegades on the banks of the river, which was called Mzumbe or “bad kraal”. In 1828, King Shaka led a raid in this area, leaving behind a relic, known as “isivivane”, a “luck heap” of pebbles trodden into the ground by countless travellers over time. The rural area is of great scenic beauty amidst rolling green hills. The Umzumbe Beach, sometimes called Pumula Beach, is beautiful, relaxing and easy to get to, a great place to enjoy birding, fishing, swimming and sunbathing, or why not learn to surf at the local surfing school? 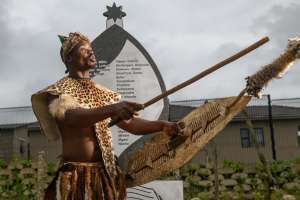 The Ntelezi Msani Heritage Centre was developed in 2007, as a ‘creative arts’ and heritage facility, playing an important role in the preservation of the local history, cultural and creative activities of Umzumbe Municipality and Ugu District. Visitors to the Ntelezi Msani Heritage Centre can enjoy a truly authentic local experience that gives wonderful insight into the soul of the Paradise of the Zulu Kingdom.

At the centre, visitors can:

The centre also offers guided tours on Tuesdays and Thursdays, from 10am to 11.30am, and from 2pm to 3.30pm, as well as the following programmes:

Learn the origins of the Zulu kingdom

The centre’s founding story of the 1906 Mthwalume Poll Tax uprising, as well as the origins of the Zulu Kingdom and expeditions of King Shaka on the KZN South Coast are all brought to life through traditional music, war cries and dance during a centre tour. There are also organised talks – Indlela yeSintu Seminar and Dialogue – outlining African history, indigenous knowledge and culture on Sunday, 13 December 2020 and Sunday, 10 January 2021 from 10am to 1pm.

Experience the art of crafts and fighting

Guided tour visitors will get the opportunity to experience the art of Zulu stick fighting, as well as the intricate crafting of beads and reeds at the Ntelezi Msani Heritage Centre. There is even an adjudication process of the completed work and performance, with awards handed to the prize winners.

A cairn of pebbles, known as isivivane, marks the places of ancient spiritual importance. As Zulu warriors travelled around the country, they would throw a rock onto the pile as a way to pay respects to past leaders. Within the KZN South Coast is Isivivane seNkosi uShaka, a site in Umzumbe where it’s believed King Shaka and his warriors passed on the way from Zululand to Pondoland in 1828. At Ntelezi Msani Heritage Centre, visitors are introduced to the essence of this important ritual and given a chance to participate in the age-old stone throwing, leaving a mark of themselves on the KZN South Coast forever.

Uncover the health and wellness secrets of Zulu tradition

The Zulu nation has long been revered for its physical strength and ability. The secret to lifelong health and wellness will be shared at a seminar – Isintu Healthy Lifestyle – which gives indigenous knowledge-based physical fitness and nutrition. These take place Monday to Friday, 8am to 9am, 1pm to 2pm and 5pm to 6pm.

Watch an original musical and enjoy a festival

This year’s centre visitors will get the chance to watch an original musical production entitled ‘Isambulo: The Story of Afrika’, written and directed by Howard Msomi. The production will feature on 16, 18, 19 and 20 December at 3pm. On Wednesday, 16 December, visitors will also get to celebrate the holiday with a Reconciliation Festival running from 9am to 3pm.

To find out about all the amazing activities, venues, eateries and sites on the KZN South Coast, simply visit www.visitkznsouthcoast.co.za or download the free ‘Explore KZN South Coast’ app from the Google play store or Apple store.