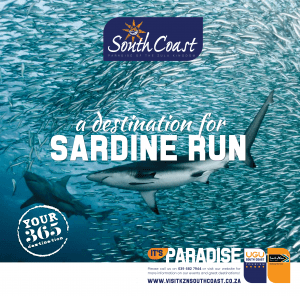 The Sardine Run has been in full swing along the KZN South Coast over the last two weeks and there is a possibility of more sightings and catches over the next week or so.

On Thursday, the 10th of June, the KZN Sharks Board led an observation flight within the Eastern Cape waters. Some of the first signs of sardine activity were seen between Warner Beach and Karridene, large shoals could be spotted and seemed to be scattered throughout the area, specifically in the surf zone.

Some netting of the sardines took place from early morning, fishermen netted about 11 times, resulting in 1650 crates of sardines! There was also word that some decent sized game fish were landed off the beach in the area. Fishermen were having a great time netting and the excitement was tangible.

The next area where the concentration of sardines seemed large, was between Goss Point and Mbotyi River Mouth, all in Eastern Cape waters. There were many pockets of sardines, and many were accompanied by around 2000 Bottlenose dolphins and 3000 Common dolphins! There were also some Bryde whales, quite popular around this time of year with the shoals. It is quite likely that this concentration of sardines may head into KZN waters soon!

The South Coast has unfortunately been rather quiet over the last few days and the poor visibility in the water did not help those trying to spot some spot pockets of sardines. The good news is that the inshore visibility is cleaning up and the sea water temperatures remain cool.

Weather and sea conditions are looking favourable along the South Coast and should continue to hold up for the next few days, there is some hope to still see some more sardine action within the week and possibly weekend, do not pack the fishing gear away yet! The KZN Sharks Board will continue to monitor the sardine activity closely and may remove or replace shark safety gear along beaches, depending on circumstances. Bathing is still banned from Port Edward to Isipingo as a safety precaution.

Remember to keep updated on the weather and sea conditions and ask around if unsure about where to catch some of the sardine action next, the shoals are out there!