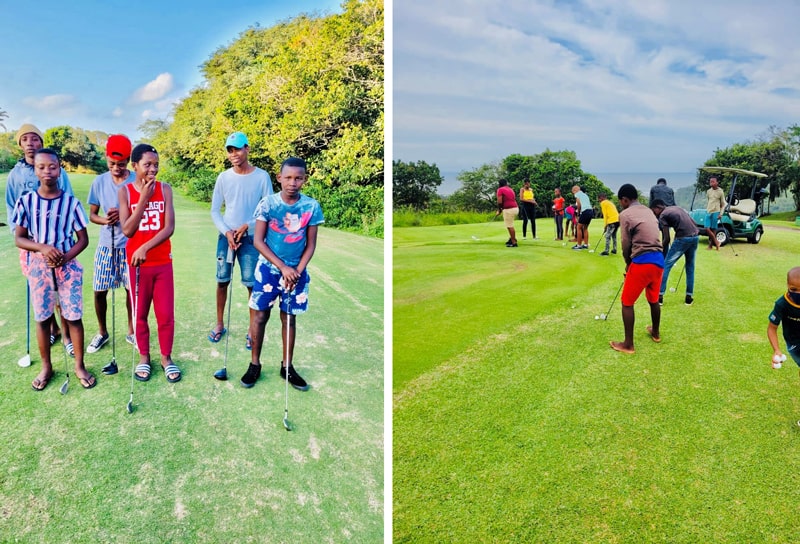 The Wild Coast Sun Golf Coaching Academy, run by golfing professional Arnold Mentz, is going from strength to strength and fostering a deep love of the game among the children of the region.

Each week Mentz takes groups of aspirant young golfers, drawn from schools in the surrounding communities, to teach them the intricacies of the game, before the older students get to play on the award-winning golf course.

Mentz, the former tour commissioner of the Sunshine Tour of South Africa and teaching professional at the Wild Coast Sun resort in Bizana, has run the hotel’s Golf Coaching Academy since October 2017.

Mentz teaches a junior group of more than 20 children, mostly aged 8-12, although “there are some little ones as young as six or seven who love the competition of playing and practicing among themselves”.

A senior group is made up of 12 students, aged 13-18, and who get to play the championship course.

According to Mentz, there is so much interest and excitement around the academy that “we have a ready source of talent wanting to play and so many kids wanting to get in”.

“Golf is really growing in this part of the world and has seen growth in the number of youngsters wanting to play.”

The academy students are drawn from five local primary schools.

But Mentz, apart from teaching and instilling a love of the game, is also an uncompromising taskmaster when it comes to education.

“I insist on strong academic achievement,” he says. “One of the main conditions to be in academy is you must be in school, that is the first priority. For academics, I am a hard taskmaster, asking to see their report cards to monitor how they are doing every quarter. With the older group, we play and after our practice round, I will ask each of them what they want to do one day.”

He says there has been a noticeable increase in academic achievement in the academy students and he puts this down to hard work but also the discipline that golf instils in terms of practice and dedication.

Last year, the Wild Coast Sun sponsored six new sets of clubs, as well as 15 apparel kits, including shoes, shirts, caps, and pants, for the young Academy golfers, while golfing equipment has also been donated by the Winnie- Madikizela Mandela Municipality and WCS golfing professional Fred Beaver. The total investment for 2021 was more than R 170,000.